December 29, 2011
Zach and I hosted an Ugly (aka really festive) Christmas Sweater party this year where everyone came ready to play some 60-second Minute to Win It games. 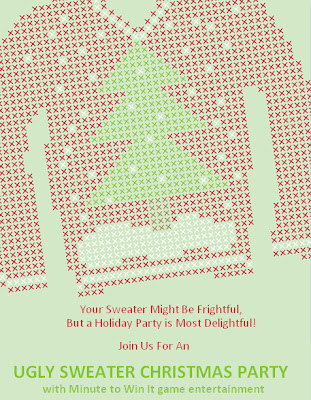 Upon arrival, everyone was given a score card with the location of the games on it. We had to spread the games all throughout the house when we realized almost 30 people were coming! 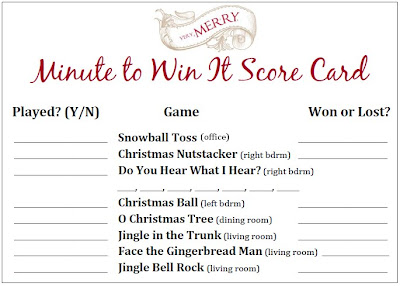 It was a very casual evening where appetizers and soup were ready for dinner when you wanted to take a break from playing games.

For the first portion of the night, we had five individual games set up throughout the house - the three 'living room' games were group games.

The Snowball Toss was located in the office. You can also see the 'photo booth' area behind the sign. 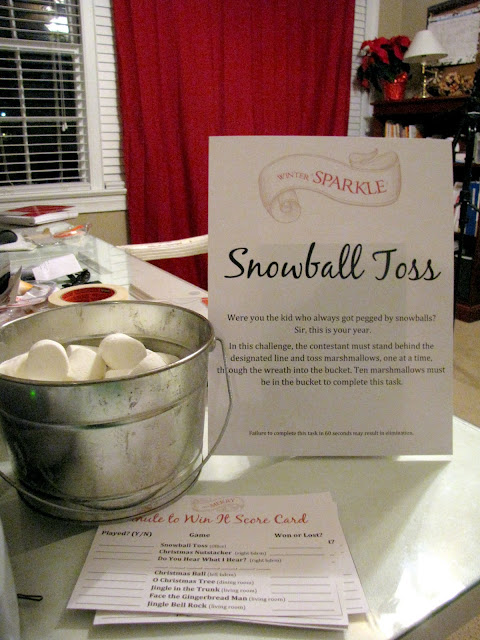 The goal was to throw the marshmallows, one at a time, through the wreath and land at least 10 in the bucket within 60 seconds. 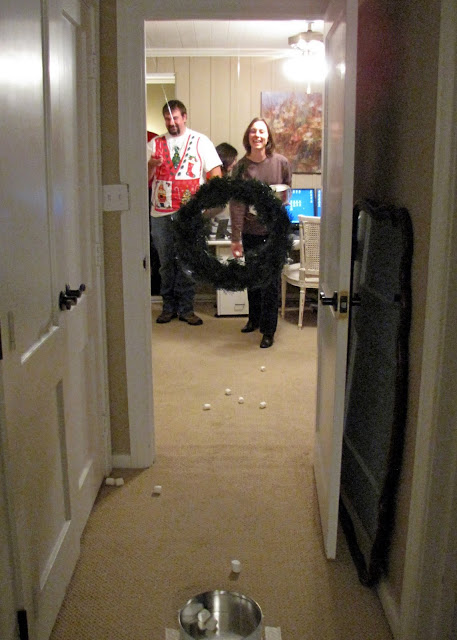 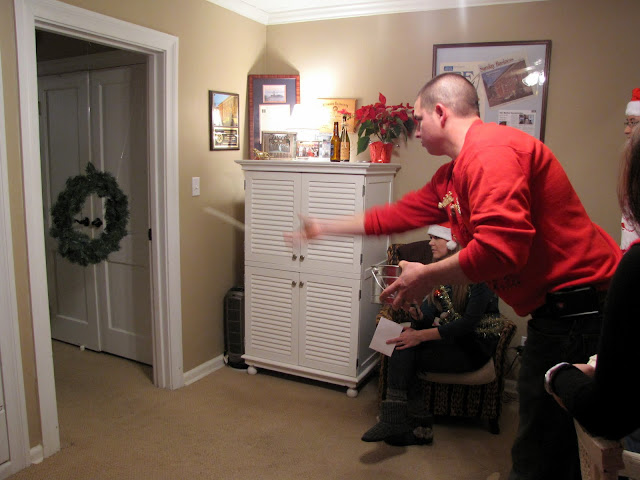 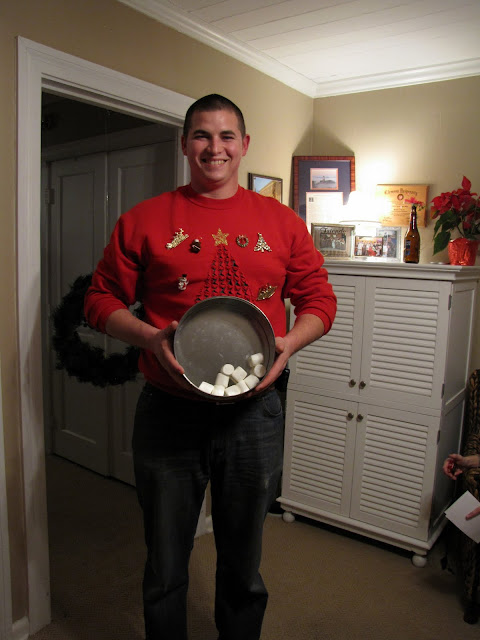 And what happens if you don't have a bucket full of marshmallows to show off? Just look as cute as Caryn by poking your head through the wreath! 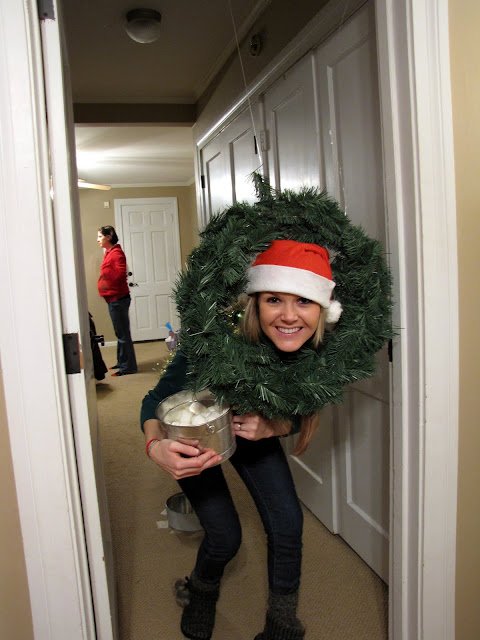 The Christmas Nutstacker game was loads of fun too! 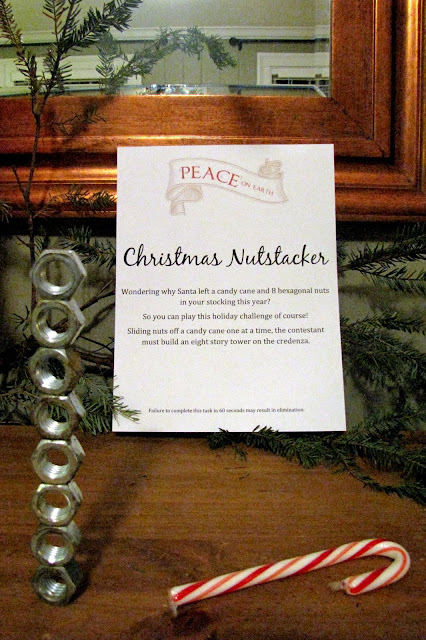 The premise of this game was to load your candy cane with the 8 nuts and then stack them on top of each other - one at a time. 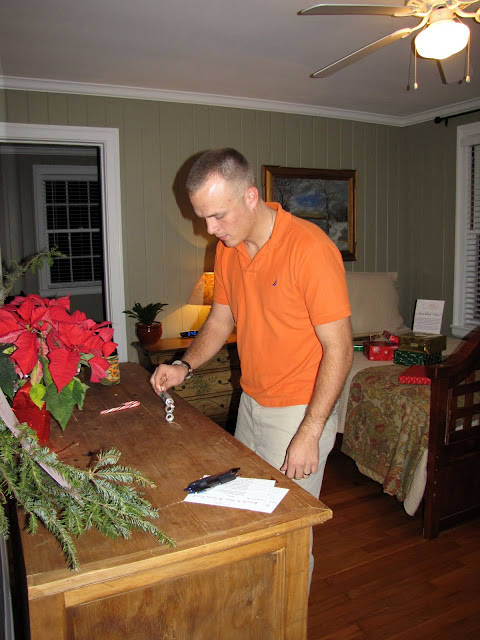 In the same room, on the bed, was located 'Do You Hear What I Hear'? 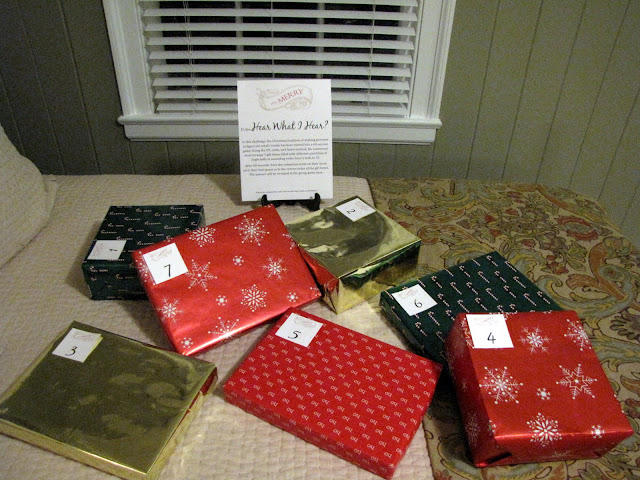 In this challenge, the Christmas tradition of shaking presents to figure out what's inside was turned into a 60-second game. Using the lift, rattle, and listen method, you must arrange 7 gift boxes filled with different quantities of jingle bells in ascending order from 5 bells to 35 bells - and then note your guess of the order on your score card. 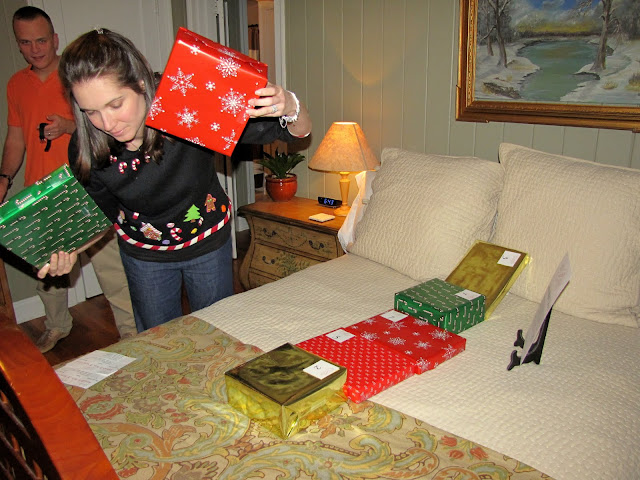 The fourth individual game was called 'Christmas Ball' and was located in the other guest bedroom. Zach moved the furniture around so that we could maximize the space. 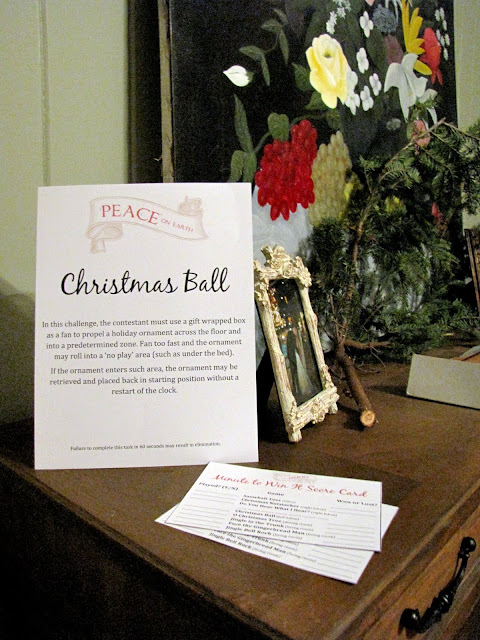 This game was surprisingly one of the most challenging games of the night. The premise is to fan an ornament using a wrapped gift box into a select area. From what I heard, only a few were able to do it! 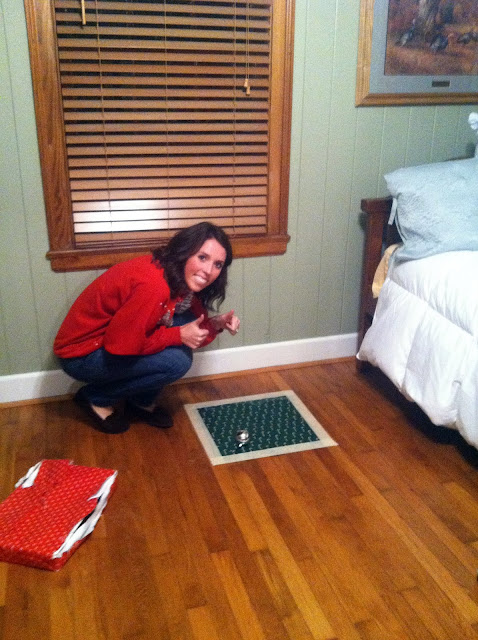 And as you can see above, here's our pretty wrapped gift box at the end of the night. 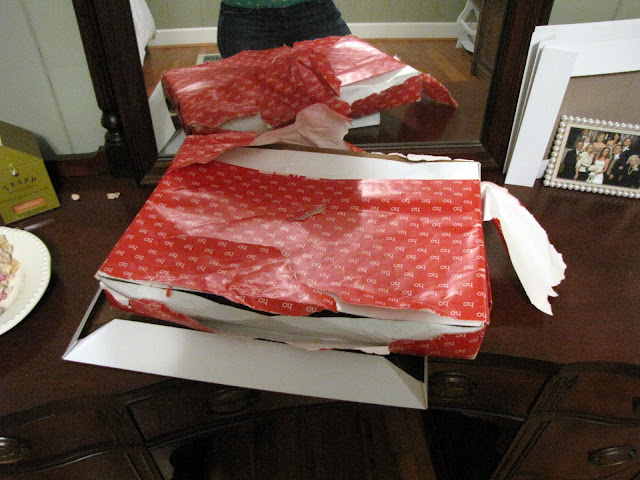 And the last game... oh boy was this one fun. I choose to place 'Oh Christmas Tree' in the dining room for two reasons - 1. I needed another space and 2. If you failed and the cups came crashing down, everyone would know! How thoughtful of me.

It was certainly fun to watch! 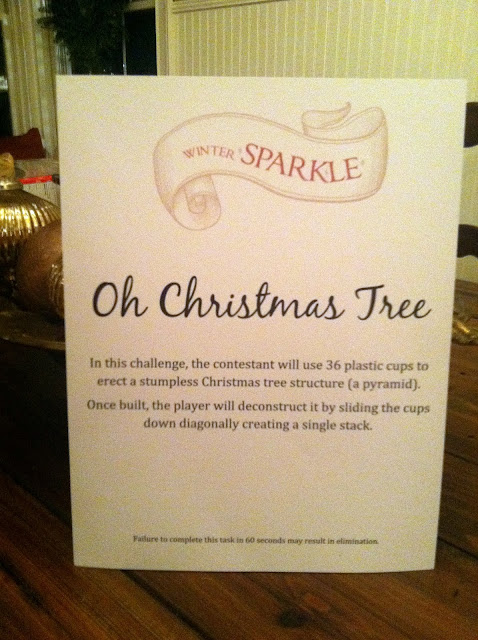 And here are some pictures of those who took the challenge! 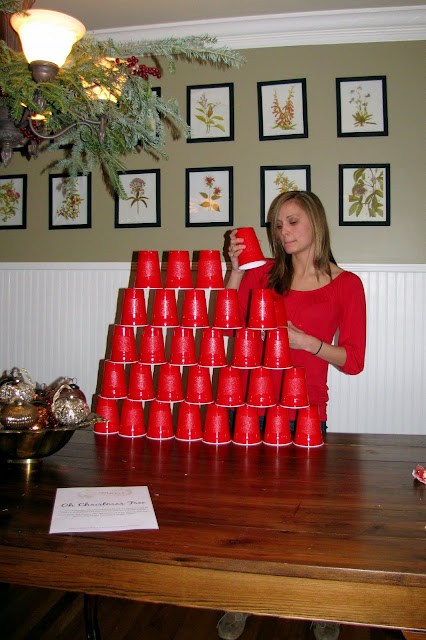 p.s. heres' the difference between using a flash and not using a flash. In the picture above, Rachel appears to be calmly placing the cups when in reality this is what she really looked like... Go Rachel, Go! 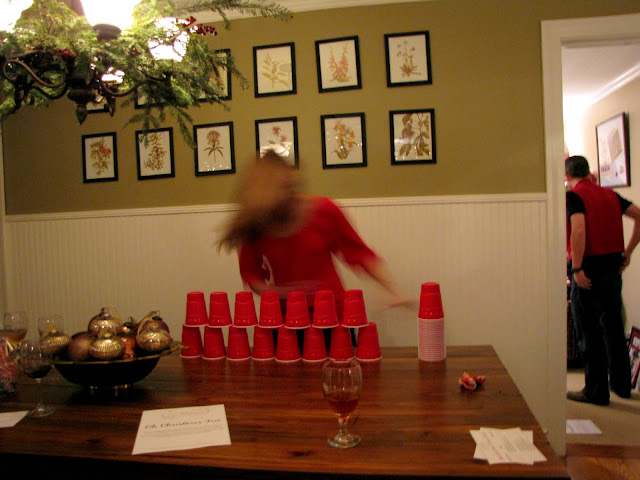 And here's Merlin bringing the cups down for a victory! 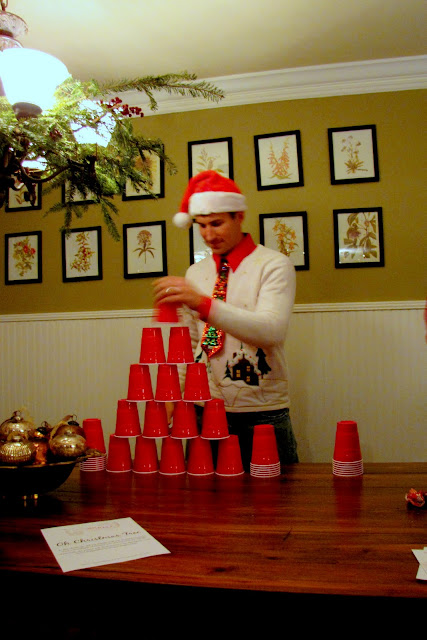 The skills - not to mention the outfits - of every person that came were so impressive! We have some competitive friends!

The individual games were really fun and a great start to our party. It allowed everyone to hang out, mingle, and even show off their competitive side. However, the group games (and by group, I mean, they were played in front of everyone) were a big hit. I had picked out and saved three games I thought would be the funniest to watch.


UPDATE: If you're looking for the templates I used for this event, you can access them here.
The fonts used are 'Cambria' and 'Blackjack'. You can download 'Blackjack' for free at dafont.com -- this is one of my favorite fonts! 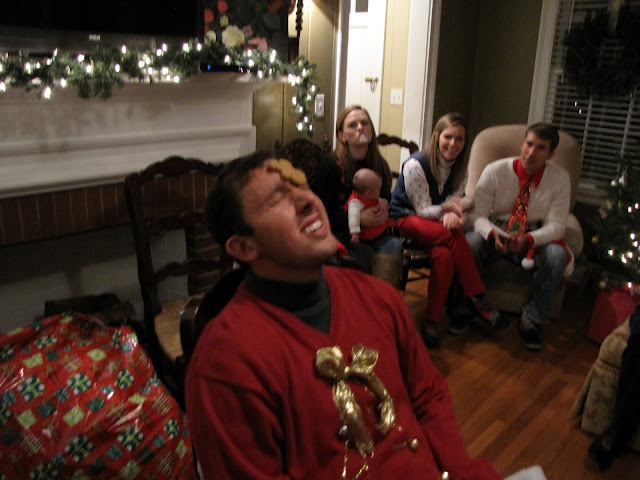 Our Christmas Party this year was an Ugly Christmas Sweater party with Minute to Win It games. The post detailing the first portion of the night and the individual games can be found here . Although the individual games were really fun and a great way to start the party, I just couldn't wait for everyone to come together to play our last three games. I would laugh just thinking about the games. The first game was 'Face the Gingerbread Man' and the goal of the game was to move the cookie that had been placed on your forehead into your mouth using only the muscles of your face. And some of the happy winners! The second game was so much fun to watch - but not nearly as fun to play! Zach and I decided to demonstrate how to play 'Jingle Bell Rock'. A pedometer was placed on a sweatband that was then placed around the contestants head. Normally, a pedometer is used to sense body motion and count footsteps while walking or running. In this chal 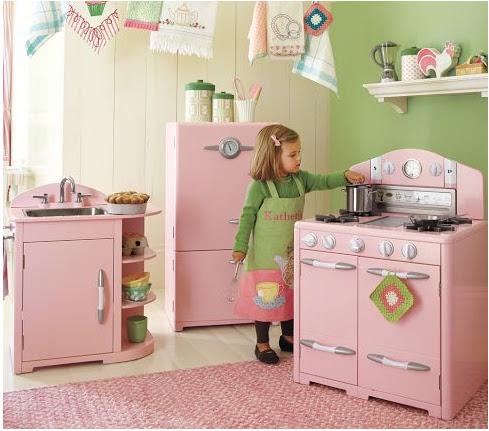 A few months back, my sister, Kristi, called. She said that she had been thinking about making Addy, my 2-year old niece, a play kitchen. I laughed. She wasn't thinking about making the kitchen, she was thinking that Z and I could make a kitchen. I gladly accepted the challenge - which meant by default that Z also accepted the challenge. We scoured the web for pictures of play kitchens we liked. There are so many creative parents and companies who make the cutest kids kitchens - so we knew our competition was stiff! We liked this retro kitchen from Pottery Barn. And we liked the outline provided by Lowe's for a kitchen that would look like this (found here ). So we - and by we, I mean it in the same way as Kristi meant 'she' - Zach began working on the kitchen. Here are some of our progress pictures. This is clearly the sink - with an under mount stainless steel sink (originally a bar sink). We also used Corian counter tops as Z's s